By Meghna A SinghaniaPublished On 2019-06-21T15:03:33+05:30  |  Updated On 21 Jun 2019 9:33 AM GMT
New Delhi:  There are total of 1364 doctor posts lying vacant in new AIIMS, the Minister of State, Ministry of Health and Family Welfare recently informed the parliament. The minister also apprised the parliament about the steps taken by the government to address doctor shortage/faculty shortage

The MOS health, Shri Ashwani Kumar Choubey was responding to a question raised by the Lok Sabha Member Shri  AJAY MISRA TENI, who had asked about the shortage of doctors at Various AIIMS across the country.

The said shortage of doctor posts lies in AIIMS at Bhopal, Bhubaneswar, Jodhpur, Patna, Raipur, Rishikesh, Mangalagiri, Nagpur and Kalyani. Of the new AIIMS, maximum faculty posts vacant are currently at AIIMS patna with 185 vacancies out of 305 sanctioned posts followed by AIIMS Kalyani with 183 posts out of sanctioned 305 posts are currently lying vacant.

Speaking further about the AIIMS at New Delhi, the Minister informed that at AIIMS New Delhi, 670 faculty doctors are working at present against the sanctioned strength of 1042 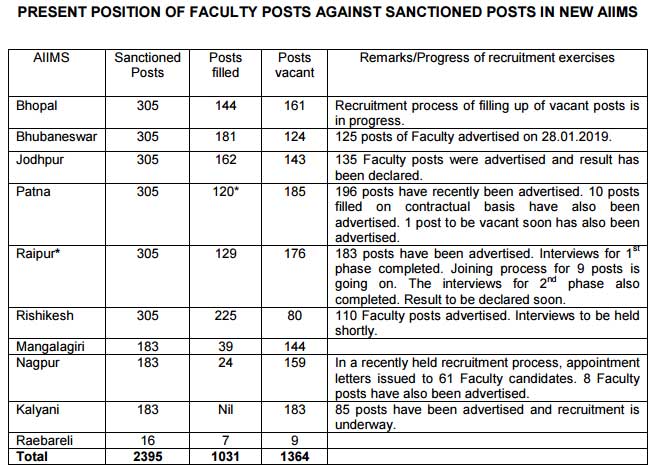 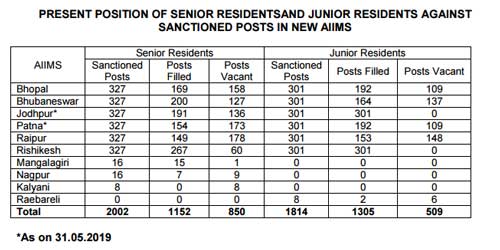