New Delhi: Around 1500 resident doctors associated with the All India Institute of Medical Sciences (AIIMS), New Delhi have declared an indefinite strike after one of their colleagues was allegedly assaulted by a senior doctor.

In a statement late last night, the AIIMS said the incident in question took place on Wednesday, following which the senior doctor apologized to his junior.

The doctors have demanded immediate suspension of the senior doctor, Dr, Atull Kumar who also heads the department of ophthalmology at the premier institute. The Resident Doctors Association (RDA) has also urged that the doctor in question should not be allowed to take in thesis candidates and conduct any kind of verbal or written examination.

As a mark of protest, the doctors yesterday worked wearing helmets. They also sought a written apology from the senior doctor concerned.

In a letter to AIIMS Director Randeep Guleria, the RDA alleged that the senior doctor slapped a senior resident in front of attendees, nursing staff and colleagues, and that the resident doctor was under depression and had gone home.

The RDA said an atmosphere of fear existed in the department headed by the senior doctor, and that nobody protested as the chief threatened to fail the junior doctors.

The resident doctors also raised the reported misbehavior of the senior doctor towards the female residents. 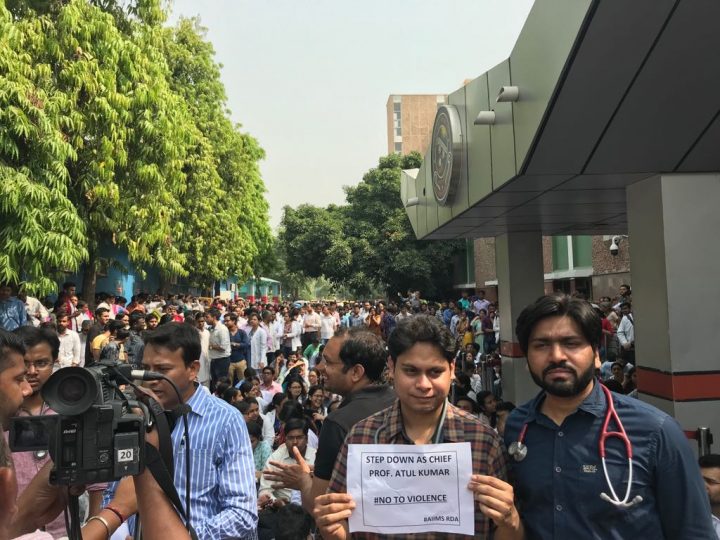 "Dear Director sir, we talk about violence against doctors by relatives of patients, but this act has caused great anguish among residents and shattered the sacred student-teacher relationship," read the letter.

"We expect an immediate and strong action from your side so that a message goes out that doctors are not here to be beaten," it said.

The AIIMS director had also instituted a five-member committee to be chaired by the Dean-Research to enquire into the incident.

However, the strike was called by the Resident Doctors Association yesterday evening, following which the medical services at the premier institute were affected.

In the wake of the strike, the hospital has instituted contingency measures to take care of the admitted patients, including those in the ICUs and wards, and includes the following


The director has appealed the RDA to call off the strike in the interest of patient care.