Mumbai:  Apollo Hospitals Navi Mumbai recently made to the list of Guinness World Records® by forming the Largest Human Image of a Human Bone.

The initiative was undertaken to create awareness on knee diseases and arthritis. Over 948 people from all walks of life united to form the largest human image of a human bone, highlighting the need to address the rise in osteoarthritis and knee disease. The event saw participants from Navi Mumbai, Mumbai and Thane as well as surrounding districts participate in creating the formation of the knee joint with immense enthusiasm.

Kapil Dev, legendary cricketer and former Indian team skipper was present at the event to support the cause. Commenting on the initiative, he said, “It was commendable to see so many people come together to create awareness on this cause. It is a matter of concern that knee problems are developing in younger people! It was very rare to see this earlier. Through such initiatives, I hope to see people make more positive changes to improve their lifestyle and do more physical activity.” 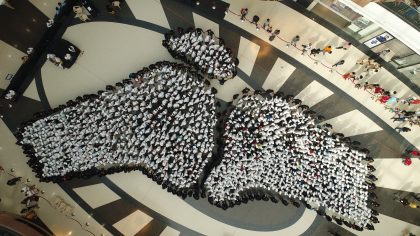 Osteoarthritis is the second most common rheumatological problem and the most frequent joint disease with a prevalence of 22 per cent to 39 per cent in India. This number is expected to grow to about 60 million by 2025 – a number that draws severe concern to the impact of knee disease on the health and growth of the citizens of the country.

Dr Siddhart Yadav, Consultant Orthopaedic Surgeon, Apollo Hospitals Navi Mumbai said, “Lifestyle factors have played a huge role in the early development of arthritis and knee disease. Obesity and a lack of physical activity are two of the biggest contributors. Early detection and early intervention is key to help patient retain active movement in their knee joints and live a normal life. This will also help prevent complications arising in the future.”