Bangalore: While the doctors, on one hand, complaining of rising violence by patients attendants and the patients, on the other hand, accusing doctors of cheating as well as negligence at various cases, the role of good communication in the doctor-patient relationship is now larger than ever.

"Should I warn my patients against all the adverse consequences even if I believe that he/she is undergoing a safe surgery?"; "Does that amount to scaring patients?"; "What if out of fear patient runs way to another doctor?"; "What if he/she sues me is something goes wrong?"-- These are a variety of questions that go in the minds of doctors; the answers to which can be found in the latest edition of Communicate. Care. Cure-- A Guide to Healthcare Communication edited by Dr Alexander Thomas.

This book is the third such edition focusing on the importance of healthcare communication. Communicate. Care. Cure. A Guide to Healthcare Communication was written to improve communication within the healthcare sector. The first edition, released in 2012, was the first of its kind in India. The second edition was released 4 years ago.

Communication workshops had begun where hundreds of trainers have reached thousands of healthcare professionals, benefitting millions of patients across the country.

This initiative was awarded the prestigious Quality Council of India (QCI) - DL Shah Award for two consecutive years in 2013 and 2014.

Now, in the third edition, 2 new chapters have been added, bringing the total to 16 chapters: one is focused on nursing communication and the other on communication for the medical student. 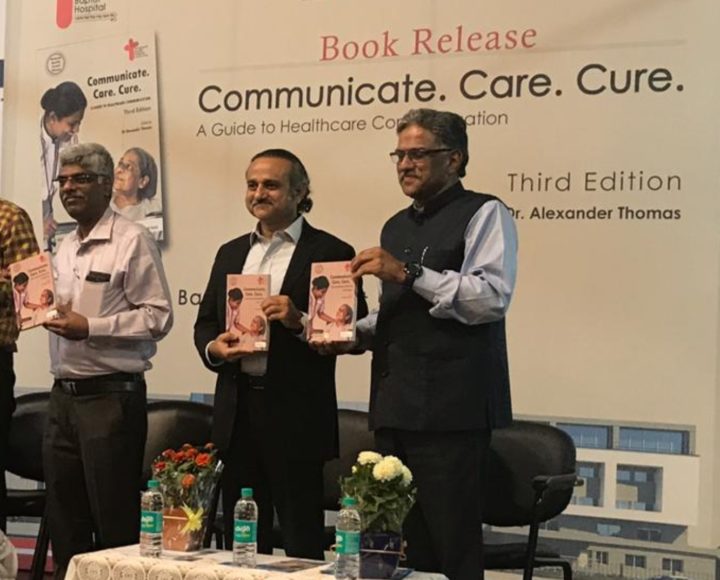 The original chapters have also been updated to keep the content relevant to the changing world. For example, a section on violence in the workplace has been added in order to equip our healthcare professionals for what has, unfortunately, become a reality in our country of late. This edition is also more culturally diverse and gender-equitable in the examples and illustrations, so that more readers nationwide can relate to them. The foreword has been written by Dr Devi Shetty. As before, the royalties from the sale of this edition will go towards the Poor Patients’ Fund at the Bangalore Baptist Hospital.