Lucknow: In order to entice qualified medical teachers including professors, assistant and associate professors to Government Medical Colleges (GMCs), the Uttar Pradesh state cabinet has decided to increase the salary of contractual medical faculty by 50%

The decision to this effect was recently taken by the cabinet chaired by the state CM Yogi Adityanath wherein authorities considered the proposal submitted by the state’s Medical Education Department seeking enhancement in the salary of contractual medical teachers.

Approving the proposal, the state increased the salary of contract medical teachers has now been increased as follows 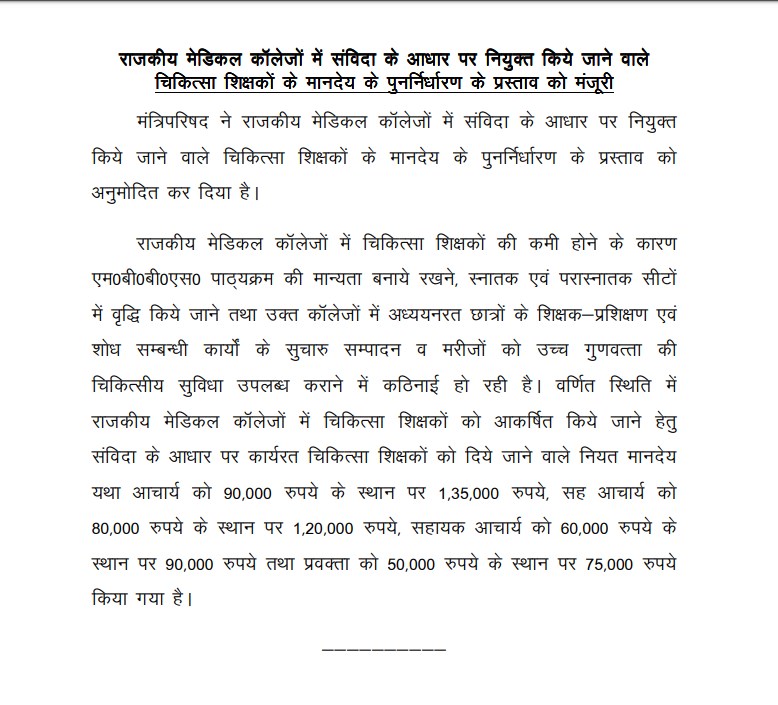 The approval has been given in a bid to meet the huge demand of doctors in the state-run medical colleges and to maintain smooth functioning at the institutes. The aim is to maintain the status of MBBS and PG medical seats, teacher-student ratio as well as to provide good medical care to the patients.

The cabinet noted that the GMCs are facing difficulty in providing apt healthcare services to the patients due to lack of doctors. The shortage is further is leading to a discrepancy in maintaining standards for MBBS, PG medical education at the institutes.

Pertinently, the state is grappling with acute shortage of doctors and the government has taken several measures to overcome it over the last few years.

In one such move, the salaries for contractual faculty have been increased. Earlier the state government had imposed the compulsory bond service.