Bathinda: Union Food Processing Industries Minister Harsimrat Kaur Badal on Friday performed the groundbreaking ceremony of the prestigious Rs 925 crore AIIMS, Bathinda project by laying the first brick to signal the start of construction of the medical college-cum-hospital which is set to revolutionise health care services in the Malwa region of Punjab. Ms Badal, who also planted an Amaltas sapling at the project site on the occasion, said today was a historic day for the people of Bathinda and the most important day of her life and thanked Prime Minister Narendra Modi for making AIIMS, Bathinda a reality.

While presiding over a function at the project site, Ms Badal said, "I have decided to start construction work as I cannot tolerate any further delay in the provision of medical services to the poor and needy people. Let the State government stop the construction if it so wants. It is not my AIIMS. This hospital is needed for treating the poor. 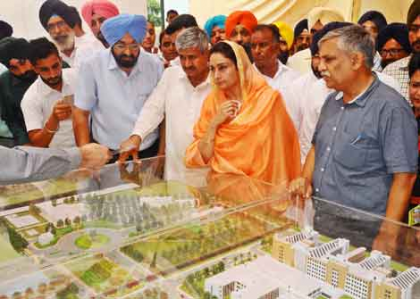 It is these people whom the Congress government will have to confront if it tries to rob them of their right to advance medical care, including cancer treatment". She said it was a matter of shame that Finance minister Manpreet Badal was lying even now by claiming necessary clearances had been given to the project.

"I challenge him to show me a copy of the environment clearance", she said adding the Congress government had done its best to delay the project by denying necessary clearances for one and half years. "But enough is enough. I will not allow any further delay.

I have asked the company responsible for executing the project to expedite work immediately so that the OPD and Diagnostic centre facility can be started on schedule in February 2019. Ms Badal said even Chief minister Capt Amarinder Singh was not aware of the ground situation.

"I wrote to him in December 2017 detailing how clearances including Environment clearance were pending. Also that power lines and irrigation channels needed to be shifted from the project site and an electricity grid was to be commissioned. The CM wrote back in February 2018 saying all the needed clearances had been given.

These clearances are still pending as of today". Stating that the crux of the matter was that the Congress party felt that she would get credit for establishing AIIMS, Bathinda, she said this was the reason why clearances were being delayed.

"This is why district officials were stopped from coming to the groundbreaking ceremony today with the Bathinda Deputy Commission refusing to attend the function despite being invited. It is a pity that in this petty politics the Congress government is harming the interests of the people of Punjab", she added. Ms Badal highlighted how even now the Congress government was not cooperating.

"We have written since months to allow us use of the Central University premises for holding classes for the first batch of 100 medical college students in August 2019 but there is no response from the Congress government. I have now asked the executing agency to create the necessary infrastructure to hold these classes at the project site itself". She assured the gathering that the entire project which included a medical college and 750-bed hospital besides nursing college and a plethora of medical services would become operational in two years time.

Earlier Rajya Sabha mp Balwinder Singh Bhundur said it was condemnable that the state had deliberately withheld clearances to the project despite the fact that it was a 100 per centrally funded project.