Bengaluru: A female PG medical student associated with Bangalore Medical College and Research Institute (BMCRI) recently became a victim of a brutal assault allegedly by members of Karnataka Rakshana Vedike (KRV) for not speaking in Kannada.

Condemning the attack, doctors and medical students belonging to the Institute's Resident Doctors' Association staged a protest and called for an 'indefinite boycott' of OPD services at various attached hospitals, including Minto Eye Hospital, Victoria Hospitals, PMSSY and others.

The protest was launched after an incident that took place on November 1 (Friday) in Minto Eye Hospital on the BMCRI campus. According to a junior doctor, the disturbance took place around 3:30 pm, when a mob barged into the hospital and cornered the female PG medical student pursuing MD in ophthalmology, demanding compensation for a patient who lost his eyesight a couple of months ago after botched-up eye surgery. It was alleged that the mishap was the result of a contaminated drug used during the surgery.

As no senior doctor was available that time, the KRV members allegedly questioned the duty doctor and the PG medico, asking her irrelevant questions and misbehaved with her.

Things soon turned ugly when the group members allegedly got into a spat with the doctor, who replied to them in English. Taking offence to her reply in English on Karnataka Rajyostava day (the day when the state was formed), KRV members lost their cool. The medico was held by her arms and made to sit in a corner and allegedly assaulted for not replying the group members in Kannada. Meanwhile, another male doctor who was filming the entire act was also assaulted and forcefully made to stop the video.

The doctors and the mob were separated by the police after being informed by the hospital authorities.

Thereafter, a complaint was moved by the dean of the hospital with the police against the KRV activists under IPC sections 353 (obstructing public servants from discharging their duty), 323 (assault), 341 (wrongful restraint) and 506 (criminal intimidation).

"We have filed an FIR and are investigating the complaint lodged by BMCRI dean HS Satish," Visveswarapuram Assistant Commissioner of Police told IANS.

The officer added that the police are searching for nearly 30 unnamed KRV members who confronted the doctor. Cops are also collecting the CCTV footage as part of the investigations.

Meanwhile, the doctors attached with the institute launched a protest criticising the incident. The protesting doctors are demanding severe action against the KRV members.

"If any compensation has to be paid, it should come from the manufacturing company. The Kannada activists are misleading the patients' families and are barging into Minto Hospital targeting junior doctors. The dean has filed a police complaint against the activists who have assaulted our doctors. We demand the drug manufacturer and activists be arrested," Dr PG Girish, director of medical education, who is backing the protest, told TOI. 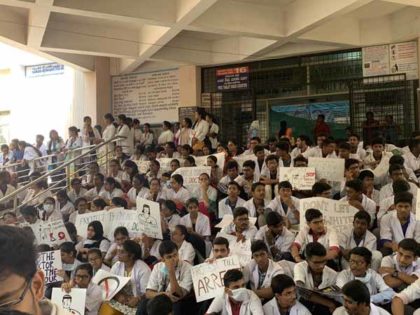 FORDA has also expressed its outrage on the incident while taking to social media:

Yesterday, Mysore Medical College joined BMCRI junior doctors in boycotting the Out Patient services in protest demanding the arrest of the assailants and having industrial grade security at government hospitals.