By ShaguftaPublished On 2019-07-10T15:07:20+05:30  |  Updated On 10 July 2019 9:37 AM GMT
Rishikesh: Slowly getting popular for its series of controversial dictums, another requirement by the AIIMS administration has now come in limelight. The latest controversy comes in terms of demand by the administration of All Indian Institute of Medical Sciences Rishikesh (AIIMS Rishikesh) from the new joiners to give an undertaking that they will ‘not participate’ in any protest. The undertaking has once again drawn a strong response from the institution's resident doctors

AIIMS Rishikesh had recently given an order making mandatory for all its doctors and allied medical practitioners to wear a scrub suit in OPD, IPD, OT, Trauma and Emergency Wards of the hospital. Entry in these wards without the prescribed dress code (scrub suits) has been strictly prohibited. Moreover, violation of norms will bring disciplinary action. The order had drawn a sharp response from the medicos of the institute who were seen taking to social media platforms and calling the order oppressive.

While this dress code policy is still seeing debates on social media, the institution has made the limelight once again with its undertaking asking the freshly joining resident doctors to fill an undertaking form before joining the institution that clearly mentioned that the medicos will “not participate in any Strike/Dharna/Demonstration/Mob Activity against institute or any activity that may adversely affect patient care”.

The undertaking also adds that violation will bring termination of services. 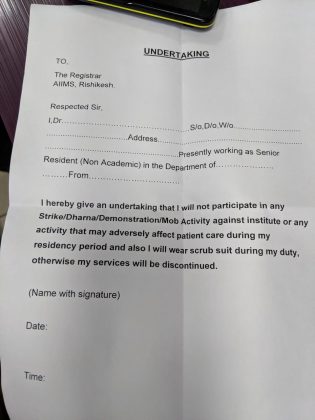 The order gained flack from the resident doctors who found it to be an attack on the basic human right of protesting against the atrocities.

Agitated with the ”Scrubs  Mandatory” and “Compulsory Undertaking” for the medicos in the institution, a resident doctor informed  the TOI, “When we are already in talks with the institution’s administration against the scrub suit policy, how can they enforce such an undertaking?”

However, the administration claimed the undertaking to be ‘nothing new’; it mentioned that all government employees fill a similar form before taking up the job.

The Director of AIIMS Rishikesh, Dr Ravi Kant told the daily, “This is an old practice and all students have submitted it so far. If someone is saying that he/she hasn’t signed it during admissions, they must haven’t read the documents properly.”


AIIMS AIIMS rishikesh AIIMS Rishikesh administration All Indian Institute of Medical Sciences demonstration dharna medicos agitated mob activity no protest Rishikesh doctors Rishikesh resident doctors undertaking
Show Full Article
Next Story
Similar Posts
NO DATA FOUND
We use cookies for analytics, advertising and to improve our site. You agree to our use of cookies by continuing to use our site. To know more, see our Cookie Policy and Cookie Settings.Ok
X