By Medical Dialogues BureauPublished On 2018-07-30T09:23:10+05:30  |  Updated On 30 July 2018 3:53 AM GMT
Patna: In a shocking incident, severe waterlogging was reported at a government hospital in Patna, following a heavy downpour in the city over the weekend. Dramatic visuals from Nalanda Medical College and Hospital showed that even the Intensive Care Unit (ICU) was inundated with the dirty rainwater, forcing doctors and hospital staff to wade in the water-logged room to treat patients.

Medical apathy in Patna peaked on Sunday as reports stated that fish were spotted swimming in the ICU, news agency ANI reported. Nalanda Medical College is the second-largest government hospital in the state capital and is spread over 100 acres and has around 750 beds, Aaj Tak reported. The disturbing visuals from the flooded hospital reveal the acute apathy of the local administration concerning the welfare of citizens. 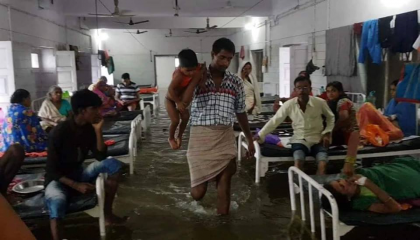 Visuals accessed from the hospital show corridors and wards flooded with unclean water. Waterlogging has also been reported outside the hospital. Water from the streets had also seeped into the ICU of the hospital. As per the Aaj Tak report, several attendees of the patients had to spend the night at the hospital standing in the waterlogged rooms, waiting for the water to subside by morning. However, the hospital premises continued to be flooded owing to the heavy rains.

Fish seen in the water logged inside the Intensive Care Unit (ICU) of Nalanda Medical College Hospital (NMCH) in Patna following heavy rainfall in the city. 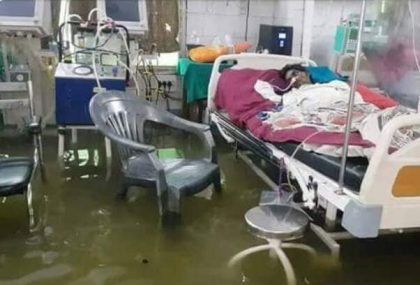 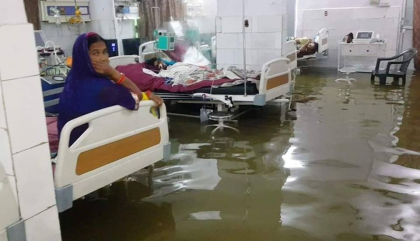 Continuous rains in Patna since Friday have thrown normal life in the city out of gear, as waterlogging and traffic snarls were reported from various parts of the state capital. In fact, water-logging was also reported outside Deputy Chief Minister Sushil Kumar Modi's residence in Patna On Saturday, the India Meteorological Department issued a warning about heavy to very heavy rainfall to take place at a few places in Bihar till August 1, The Times of India reported.
ICU Intensive Care Unit medical apathy Nalanda Hospital Nalanda Medical College NMCH Patna Sushil Kumar Modi waterlogging