New Delhi: Two medicos have gone missing from Delhi in the past three days under mysterious circumstances; prompting their families to resort for help via social media. One of the missing resident doctors was associated with the Postgraduate Institute of Medical Education and Research (PGI Chandigarh) while the other one was working at All India Institute of Medical Sciences (AIIMS), New Delhi.

A public outcry has been raised by the family of the missing doctors in efforts to find them and an emergency missing notice has been issued by the Hauz Khas police in this regard.

One of the missing medicos is a 29-year-old paediatrician from PGI Chandigarh who was practising as Assistant professor in a government hospital in Chandigarh. However, off late, he had dropped practice to continue his further studies.

The doctor had secured AIR 4 in DM exam in Jawaharlal Institute of Postgraduate Medical Education & Research (JIPMER) and had travelled from Chandigarh to Pondicherry via Delhi to attend the counselling. In Delhi, the paediatrician had gone to meet his friend, who is also a resident doctor in AIIMS along with his wife, the other missing doctor.

The paediatrician was supposed to board a train to Chandigarh. However, he went missing on December 25.

Police inquiry revealed that the female doctor whose husband was the friend of the lost paediatrician is also missing. The husband told the police that he had left for his duty on December 25 from 8 am till 2 in the afternoon. In between, he spoke to his wife over a phone call around 11 am. Thereafter, there was no clue of her, suggests a recent report in Amar Ujala.

Further police inquiry revealed that the female medico had booked a cab via her cell phone, however, she never boarded one. Moreover, the mobile phone of both the medical practitioners was switched off and the last location was tracked as Hauz Khas.

As per the local daily, the three doctors were friends and had studied in Hyderabad Medical College. Later, in order to pursue PG medical course, they joined PGI Chandigarh and AIIMS.

The Hauz Khas police registered an FIR under IPC 365 and made a missing persons appeal for the two medical practitioners as; 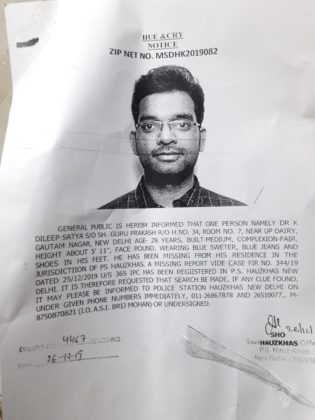 The other female medico is MD Dermatologist in AIIMS. 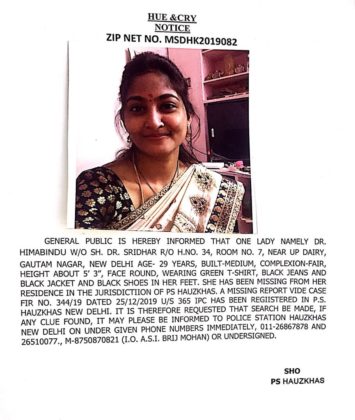 The paediatrician's spouse has also taken to Twitter seeking help to spread a word find her husband.