The notice further directed all such testing centers, Pathological Laboratories, Diagnostic Centres, Clinics, Nursing Homes, Hospitals to immediately shut down operations referring to the High court order that clearly directed closure of such establishments and also adding that any persons/organisations found in violation of the order and/or operating illegally would face severe prosecution from the authorities. 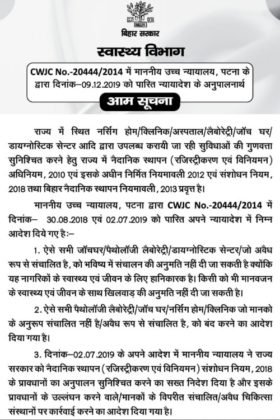 Medical Dialogues team had earlier reported that the court had pulled up the state government for its inaction regarding the unauthorized clinical establishments functioning in the state and directed the authorities;

"to publish a full-fledged advertisement in the daily newspapers, both English and Vernacular, informing the general public of all the directions issued by this Court vide orders dated 30th August 2018 and 2nd July 2019, directing closure of all such illegal establishments in the State of Bihar. Also, wider publicity is given in both print and electronic media, asking the people to get avail facilities only in such of those Laboratories/ Institutions which stand recognized by the authorities constituted under the Act/ Rules etc. This shall positively be done immediately and not later than one week from 9th December 2019."

The matter was brought before the bench by the Indian Association of Pathologists and Microbiologists which had sought the state’s stance on the illegal health centres expanding in the state rapidly over the years and the inaction over it.

Subsequently, the court in its interim order directed to close all illegal clinical set-ups across the state and further condemned the state for not issuing any sort of notice to show cause and taking no action of closing such establishments. It had observed:

"This unlawful running of unauthorized Pathological Centres/Laboratories /Institution and Establishment is perhaps leading to faulty diagnosis and treatment of the patients. At the first instance, there is no explanation why these Laboratories are allowed to be established. Save and except for registering an FIR, and that too against one isolated person, we notice no concrete action to have been taken in enforcing the provisions of law, which the State is otherwise dutybound to do so, more so, when it is a settled principle of law that right to medical health is a constitutional right."