New Delhi: Doctors and medicos attached to the Indian Medical Association and various medical institutes staged protest against the National Medical Commission (NMC) Bill by burning copies of it outside All India Institute of Medical Sciences (AIIMS). The bill was introduced in Lok Sabha recently on Monday.

While alleging that many clauses of the bill such as increasing management or NRI quota to more than 50 per cent, National Exit Test (NEXT) and Mid-level practitioner or bridge courses are not acceptable to all the doctors in the country, the protesting doctors termed the bill 'anti-student' and 'anti-poor'.

The Emergency Action Committee of the IMA opposed the NMC Bill 2019 saying that  it has only undergone cosmetic changes and the core concerns raised by the doctor's body are still unaddressed.

Though the deleterious clauses have been retained in the bill, the addition of Section 32 that legalises quackery by empowering community health providers to practice medicine will only endanger the lives of people. This is the single largest threat to the health of the nation, the IMA said in a statement.

"The decision to couple NEXT and NEET lacks clarity and is absurd. While the licentiate examination will give license to the minimum qualified person to practice medicine, NEET will be selecting the best students aspiring for PG medical education," said National President of IMA Dr Santanu Sen.

He said this will prevent more than 50 per cent of the qualified MBBS graduates from practising modern medicine. "This will also give rise to quackery as the government will allow the quacks, who are hardly 30 per cent of the total doctor's population to practice under the pretext of 'Shortage of Doctor'," Sen said.

"Foreign graduates will also have to give final year exam to get license but where they will give exam and with which university or colleges and why increase burden on those colleges," the doctors told the mediapersons.

"The IMA at all costs is against the decision as this will also increase health safety concerns of the common people. The government in their wisdom are refusing license to practice to qualified MBBS graduates coming out of our medical colleges every year, but promoting indirect quackery," he said.

The other clause includes provision to fix fee of private medical colleges capped to 50 per cent of the seats has been further diluted to framing guidelines only.

Now, 100 per cent of the private medical seats will be deregulated regarding the fee subject to non-binding guidelines. Medical education in the country will become expensive placing the lower socio-economic groups in great disadvantage.

"This effectively removes poor and middle-class reckoning for such seats. However, lack of clarity on implementation has jeopardised the decision itself," R V Asokan, Secretary-General of IMA, said. 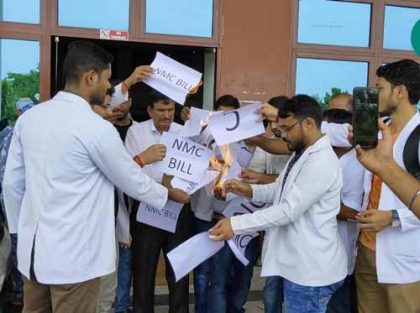 Taking into account that more than 279 out of India's 500 plus medical colleges are in the private sector and the eligibility criteria to open a medical college has been further diluted to include all the companies and even private partnerships, the commercialisation of India's medical education is complete.

"There has never been a blatant pro rich bias of this intensity. The NMC Bill is a pro-private management bill paving the way for widespread corruption," Rajan Sharma, National President-Elect, IMA, said.

Meanwhile, the student wing of the IMA termed the bill as "anti-poor, anti-student and anti-democratic", and said if passed it would lead to only ministers and MPs running medical colleges across the country.

"In NMC, the government has increased management quota seats above 50 per cent, which simply means that you are selling MBBS seats. If you sell MBBS seats, an ordinary or poor individual cannot think about pursuing medical education. If this happens, the doctor's avocation will be purchased, which is not acceptable," Sharma said. Overall it will be huge loss for hardworking and meritorious students, the prostesting doctors added.

The doctors claimed that the clause of Mid level practitioner (Bridge Course) in NMC bill allowing crosspathy will deepen the divide of rich and poor, Urban and rural. "This clause allows second class treatment of poor rural Indian citizens to be treated by less qualified mid level practitioner," they stated.

The bill proposes a common final year MBBS examination, to be known as National Exit Test (NEXT), for admission to post-graduate medical courses and for obtaining license to practice medicine.

It would also act as a screening test for foreign medical graduates, official sources said.

The bill was first introduced in Parliament in December 2017, but lapsed with the dissolution of the 16th Lok Sabha.

"It is likely to come up for discussion in the Parliament on Wednesday," an official source said.