Ahmedabad: In a shocking incident, a 35-year-old anaesthetist was allegedly beaten up and kidnapped to a deserted spot by a group of men after the death of a patient, who was admitted at a private hospital for childbirth. The anaesthetist was abducted and forced to confess at knifepoint that the women died due to negligence of the treating doctors. The entire episode of his confession was filmed and he was further threatened to stick to his words in the video, else his family members would be killed.

The incident took place at night on December 25 in Navkar Maternity Hospital following the death of a 29-year-old pregnant woman who had delivered a child there. The anaesthetist identified as Dr Kalpesh Nakum was part of a medical team attending the patient. He was directed to administer spinal anaesthesia to the patient for an urgent caesarean operation. Thereafter, a surgery was conducted and the patient delivered a baby girl.

However, after the delivery, the patient started bleeding excessively. The patient was rushed to VS hospital after informing the kin. The anaesthetist and the nurses too accompanied the patient there and later returned back.

Soon after, around 9.30 pm, the anaesthetist heard a commotion at the reception of Navkar Hospital. It was seen that three men were creating ruckus and vandalising the hospital's properties. They then dragged Nakum and switched off his cell phone and took him by force to a desolate spot. Nakum was allegedly assaulted and compelled to record a video while making a false confession, wherein, the doctors were held responsible for the death of the patient. Later, he was released at Narol Circle. 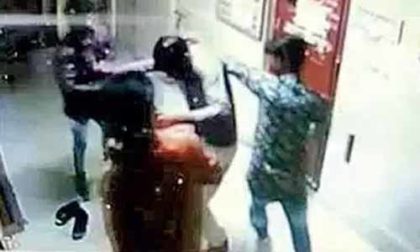 Thereafter, he lodged an FIR with Ellisbridge police. Taking cognisance of the complaint, police booked a case of assault and kidnapping against unknown persons under IPC sections 323 and 365 respectively. The officials collected the CCTV footage of the incident at the hospital to identify the abductors.

According to city police officials, the accused were identified as Salman Mirza, Shamshad Ansari, Maqbul Pathan and Furqan Pathan.

The city crime branch assisted the police in probing the matter. Two accused in the case, Salman and Samshad were arrested and handed them over to the local police (Ellisbridge) while Maqbul and Furqan were arrested by Ellisbridge police.

Meanwhile, a group of doctors protested in front of Ellisbridge police station at midnight, demanding action against the accused.

Vice president of Gujarat chapter of Indian Medical Association Dr Jaswant Durbar told Ahmedabad Mirror, "We strongly condemn the incident. The doctors had given the patient the right treatment and had even accompanied them to the SVP Hospital. Unfortunately, complications are part of the medical profession."

The members of the association also met Home Minister Pradipsinh Jadeja and sought strict action against those who had abducted and thrashed Dr Kalpesh Nakum after a 29-year-old woman died following postpartum haemorrhage, reports the daily.