All private hospitals will join Ayushman Bharat, says Nadda, But Do Hospitals Agree?

Addressing a press conference on completion of four years of the Narendra Modi government here, Mr Nadda said, "The private hospitals will join us in this ambitious scheme. Everybody will have to join. The private hospital had issues but when number of patients will increase, this will benefit the doctors and hospitals.

Benefits from this scheme will be seen in the long term."Mr Nadda said the National Health Protection Scheme would cover around 50 crore beneficiaries providing coverage upto Rs five lakh per family per year for secondary and tertiary care hospitalization.

Medical Dialogues team had recently reported that the Ministry of Health had recently fixed the packages of 1354 procedures in its ambitious National Health Protection Mission under which treatment for coronary bypass, knee replacements and stenting among others would be provided at 15-20 percent cheaper rates than the Central Government Health Scheme (CGHS).

Read Also: Caesarean deliveries: Private Hospitals will have to take clearance under Modicare

Under the 205-page draft model tender document which was shared with the states, knee and hip replacements were fixed at Rs 90,000 each, stenting at Rs 40,000, coronary artery bypass grafting (CABG) at Rs 1.10 lakh, caesarian delivery at Rs 9,000, vertebral angioplasty with single stent at Rs 50,000 and hysterectomy for cancer at 50,000.

The rates had immediately met with opposition from many of the prominent hospital chains. Notably, the Association of Healthcare Providers India (AHPI), which represents 3000 private healthcare institutions, in a letter to the CEO of Ayushman Bharat, had recently said the rates of the scheme were extremely low across all procedures and it would be difficult for any private healthcare provider to offer their services or participation. The organization pointed out that there was no basis on which the government had fixed the rates of Ayushman Bharat. It also provided a reference to an actually cost study which was done by the government of Karnataka, adding that the rates proposed by the government were much lower than what had been justified by the state government study

"We were told in our meeting with you that rates were being revised. However, even the revised rates do not come anywhere close to the actual cost incurred by the hospitals as per the costing study of the government of Karnataka. Furthermore, it is surprising to note that rates of some of the procedures have on the contrary been reduced. Under the conditions, private health care providers would not be able to sustain themselves in providing quality health care unless the rates are reasonable and scientifically arrived at," the letter stated

"..Participation of health care providers would be sparse and Ayushman Bharat will remain grossly ineffective on the ground", the letter signed by Dr Girdhar Gyani, DG AHPI added.

"We want rationalisation of the rates for sustainability of hospitals as the government wants to rope in nearly 20,000 hospitals. The package rates should take into account both direct and indirect costing,"We have told the government that the biggest super-speciality hospitals are unlikely to get empanelled for the programme, at least in the launch year, as the rates are as low as 11-15 per cent of the actual costs in some cases," Girdhar J Gyani told Medical Dialogues 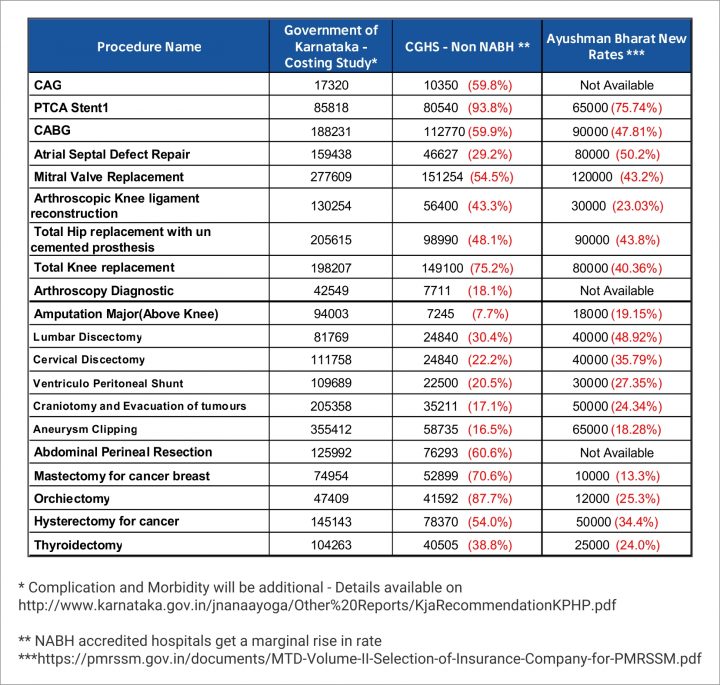 "The fact is that rates under CGHS meant for Central government employees, pensioners and their kin are very low and have been fixed arbitrarily without any scientific basis," Gyani said. "So we want the government to open a cost analysis cell and do a comprehensive study of the actual cost of surgeries and medical procedures for fixing rates."

"We have, therefore, proposed to the government that hospitals be allowed to be empanelled for selective procedures—for which rates are reasonable—and opt out for the rest. But if that does not happen only smaller private hospitals will respond to the government's call," Gyani observed.

Despite this opposition, The Wire adds, the government has gone and "frozen" these rates and is unlikely to change them.

Do You think Private Hospitals will show continuing Enthusiasm to Modicare? Please mention your comments below