New Delhi: Struggling with the acute shortage of residents, in particular, senior residents at the government hospitals in Delhi, the Delhi government recently announced its decision to enhance the upper age limit for the appointment for the post senior resident from 33 years to 40 years.

The decision in much in line with the recent amendments in the Minimum Qualifications for Teachers in Medical Institutions Regulations ( amendment ), 2017, whereby the qualification of a senior resident ( Broad Specialities) was re-defined as

Senior Resident is one who is doing his/her residency in the concerned post graduate subject after obtaining PG degree (MD/MS) and is below 40 years of age.

Taking que from the above amendments, the Deputy Secretary (HR), Department of Health, Govt of NCT of Delhi in a letter addressed to all Medical Superintendents/ Medical Director/ Head of the Institution has announced the following

......It is informed that the competent authority has given its approval for enhancement of upper age limit for appointment to the post of Senior Resident as 40 years in place of 33 years in pursuance of gazette notification published by Medical council of India dated 8th June, 2017.....

...This issues with the prior approval of Hon'ble Lt Governor, Delhi

Attached Here is the notification of the same 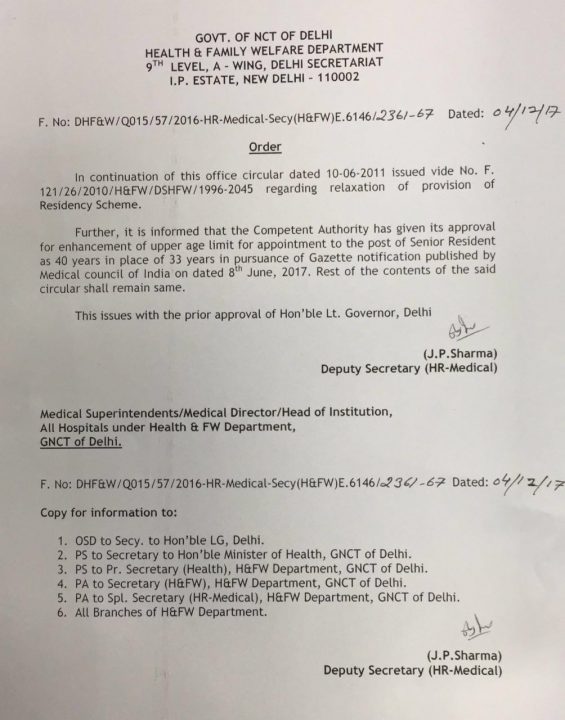