DELHI: The Indian Medical Association (IMA) has recently submitted a letter to the Honorable Prime Minister Shri Narendra Modi urging the formation of Indian Medical Services (IMS) on the lines of IAS, IPS and IFS.The letter was forwarded after submitting a detailed report to Cabinet Health Secretary, Preeti Sudan explaining the importance of IMS. This came after the National...

DELHI: The Indian Medical Association (IMA) has recently submitted a letter to the Honorable Prime Minister Shri Narendra Modi urging the formation of Indian Medical Services (IMS) on the lines of IAS, IPS and IFS.

The letter was forwarded after submitting a detailed report to Cabinet Health Secretary, Preeti Sudan explaining the importance of IMS. This came after the National working committee of the Indian Medical Association submitted their recommendations to the IMA.

The committee was organized to make recommendations on the Indian Medical Services which will be a separate cadre. A 40 page detailed explanation asserting the importance of IMS was delivered to IMA on Tuesday by the National Working Committee.

ALSO READ: COVID Outbreak: Community spread has begun, situation is bad, says IMA
The Medical Dialogues team had reported that FORDA (Federation of Resident Doctors Association) and IMA (Indian Medical Association) had demanded the formation of IMS as the coronavirus pandemic once again stressing the need for improving the healthcare infrastructure in the nation beginning from the grassroots. Now the members finally held a meeting on Sunday and handed over their recommendations to IMA after finalizing the report.
The recommending committee also explained that as far as the terms of service, condition, posting, recruitment, and criteria are concerned, it will be similar and on par with those which are applicable to IAS. The entrance for the Indian Medical Services can be given by those who have an MBBS degree from a recognized University. After getting the reports IMA, submitted it to the Cabinet health ministry while writting a letter to the PM as well.
ALSO READ: Demand for Separate Indian Medical Services Cadre escalates
In the letter addressed to the prime minister, IMA submitted that "Indian Medical Services is an intervention that the government could bring in as a game-changer in the difficult situation. It is a matter of Record that such an all India service existed in British India. The need for such an all India strategic force is all the more they live and an eminent today. Whatever the constitutional considerations were there in 1948 to disband the service the health emergency of 2020 has overcome. All India Medical Services is a lifetime for the safety and health of our people. If federalism was chosen to give vent to the legitimate aspiration of our people, a strong union was also put in place."
The letter also added, "the aspirations of the medical profession to provide leadership to this enormous challenge before our nation has to be addressed sincerely". The importance of one Nation and one guideline has been stressed by IMA.
The letter further suggested that "it is with this great anticipation IMA looks upon the government to accept the legitimate demand for the Indian Medical Services. About from giving doctors their well-deserved role and responsibility in nation-building. It will be the appropriate answer to the current situation and a huge leap into the Future. This crisis has shown that when the health of the nation is challenged every facet of the country grinds to a halt." 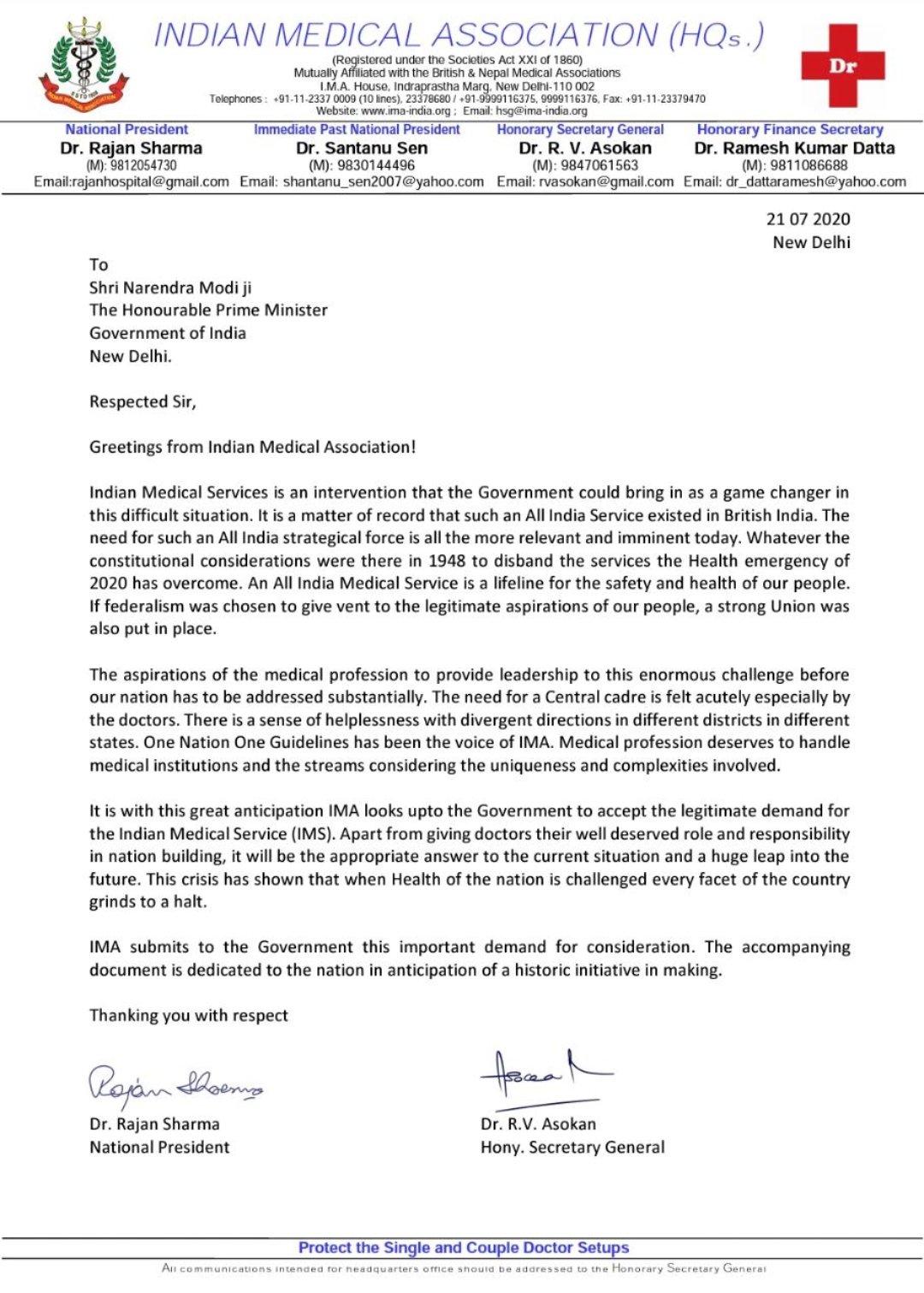 Dr. Ved Prakash Mishra, National head of academic program had previously headed a five-member team to work on the structure formation, operation, and the function of IMS. According to Midday, the other members of the committee are Dr. Vinay Agarwal, former national president and member of IMA; Dr. Shivkumar Utture, president, Maharashtra Medical Council (MMC) and Dr. R V Asokan, secretary-general, IMA HQ-Delhi. After developing their report on IMS, they handed it over to IMA and IMA finally submitted it to the central government.
Commenting on the importance of IMS, Mr. Mishra told TOI that "IMS' core scope is to create a specialized breed of administrators who would undertake better management of health care system, including public health with ease, elegance and desired innovation in the larger public interest as a part of cadre under All India Civil Services."