By Shagufta Perween PerweenPublished On 2018-09-28T09:14:08+05:30  |  Updated On 2021-08-23T11:56:01+05:30
New Delhi: While all are celebrating the launch of the largest healthcare scheme in the World -Ayushman Bharat –Pradhan Mantri Jan Aarogya Yojana (AB-PMJAY), the celebrations took a negative turn for Assam health minister, Himanta Biswa Sarma who drew flak from twitteraties on account of sharing details of the beneficiaries on twitter

Celebrating Ayushman Bharat, the minister took to Twitter to write , "It's heartening to share that within 24 hours of its launch we have given benefits of Ayushman Bharat to 21 needy patients across different hospitals in Assam. Likely rise in numbers from Tuesday." This was accompanied by the list of 21 names of the beneficiaries. 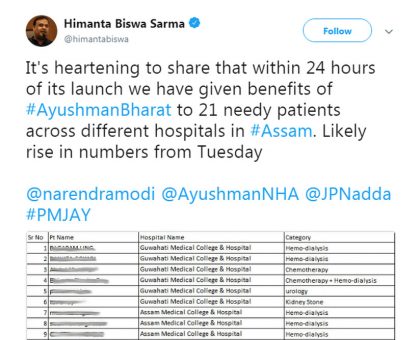 Mr Sharma shared the name and medical issues and hospital and seeking treatment for various ailments by the patient under AB-PMJAY. Reacting to his tweet, people trolled him, alleging that he has violated the right to privacy of the patients availing the treatment under the scheme. Later, the tweet was removed from his page.

Similar mistakes were made by other government officials as well. According to the Deccan Chronicle report, that Dr. Dinesh Arora, Deputy CEO of Ayushman Bharat, tweeted, "Five patients admitted in Ranchi Institute of Medical Sciences for urology and cystoscopy. Privileged to be part of the team implementing this mission (sic)." Along with the screenshots of the patients' names, ailments and assigned doctor, from Excel sheets.

Medical Dialogues had recently reported that the health ministry through NHRC is trying to implement the charters of patients' rights. The draft of the same states

"All patients have a right to privacy, and doctors have a duty to hold information about their health condition and treatment plan in strict confidentiality unless it is essential in specific circumstances to communicate such information in the interest of protecting other or due to public health considerations. All data concerning the patient should be kept in secured safe custody and insulated from data theft and leakage."

Shagufta Perween Perween
Show Full Article
Next Story
Similar Posts
NO DATA FOUND
We use cookies for analytics, advertising and to improve our site. You agree to our use of cookies by continuing to use our site. To know more, see our Cookie Policy and Cookie Settings.Ok
X
Advertisement
X
X