The purpose of the social media account has been cited to primarily inform the people about the news activities as well as upcoming programmes and workshops, etc at the respective hospitals/

For instance, the medical superintendent of Dr Ram Manohar Lohia hospital told Hindu, “The dharamshala, which will provide lodging space to the families of patients, will be inaugurated soon. We would be starting a few new courses. The Twitter account will help us in disseminating information about these things directly to the public."

Over the past few weeks, the hospital has posted 16 tweets using its @RMLDelhi account and got 16 likes and 67 followers. The tweets were about Yoga Day celebration at the hospital, newspaper clippings and the inauguration of the AMRIT — the affordable medicine and implants store. 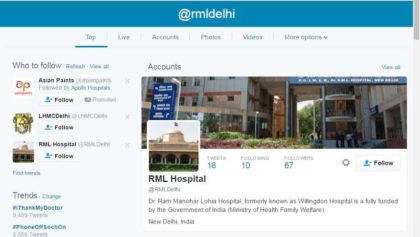 Besides their pre-planned updates about hospital activities an programmes, Safdarjung hospital plans to update its monthly patient data on Twitter to make the functioning more transparent.

About their initiative towards Digital India , medical superintendent of Safdarjung hospital, Dr AK Rai said," We might update unusual cases or interesting cases which come to the hospital for the knowledge of the public at large. The hospital will also take note of any complaints from patients that they receive on their twitter feed."

The twitter address for safdarjung is @SJHDelhi, till the date, the  Safdarjung hospital  has 24 tweets, 46 followers and 7 likes. The tweets were about the history of the hospital and newspaper clippings where doctors of the hospital have been quoted. 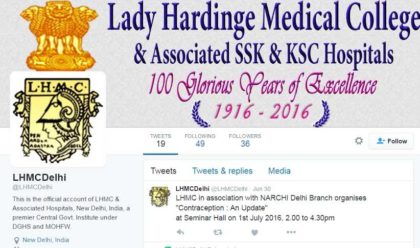 savita thakur thakur
Show Full Article
Next Story
Similar Posts
NO DATA FOUND
We use cookies for analytics, advertising and to improve our site. You agree to our use of cookies by continuing to use our site. To know more, see our Cookie Policy and Cookie Settings.Ok
X
Advertisement
X
X