New Delhi: With the rising incidents of doctors contracting and succumbing to coronavirus, the Indian Medical Association (IMA) has issued a red alert for the doctors and medical administrators on Wednesday asking them to adopt the highest standard of infection control protocols. The IMA officials said that they aimed to ensure the safety and security of the doctors and their family members...

New Delhi: With the rising incidents of doctors contracting and succumbing to coronavirus, the Indian Medical Association (IMA) has issued a red alert for the doctors and medical administrators on Wednesday asking them to adopt the highest standard of infection control protocols.

The IMA officials said that they aimed to ensure the safety and security of the doctors and their family members from the Covid-19 pandemic.

As per the data of IMA National COVID registry data, of the total 1,302 doctors have been infected, 99 of them have lost their lives fighting against COVID, where 75 per cent of them being above the age of 50 years. While the data suggests that both senior and young doctors are equally vulnerable to the infection, the subsequent mortality has been on the higher side among the elderly, reports ANI.

"We have gathered data from all the districts, and it shows that more than 1,300 doctors got infected by Covid-19, in which, almost a hundred lost their lives. This situation demands us to be more vigilant," said R.V. Asokan, honorary secretary secretary-general, IMA.

The officials also said that the doctors need to introspect their working. "Doctors need to take charge of the situation and ensure safety for themselves, their families, their colleagues and staff," the circular read adding that wide dissemination of such knowledge is happening through an avalanche of webinars helping doctors to face the challenge. Since the administrative gaps are being addressed, clinics and Nursing Homes have opened, hospitals are functioning to capacity.

Speaking to IANS, Rajan Sharma, national president of IMA, said, "We have lost more than 100 doctors in the battle against the pandemic. We need to introspect and rethink where we went wrong in this fight. The key to protection is never to lower your guard."

The circular stated that "If Covid mortality has to be lessened, it has to start with doctors and hospitals."

The circular further advised that "intense review and updating of all administrative set-ups in the hospitals including the infection control protocols. Any gap in providing for the safety of doctors, nurses and staff have to be closed. A feedback system from the doctors, employees and public needs to be in place. Cleaning and sanitising protocols should be meticulously adhered to."

"Recovery is the norm; death is an exception: even for doctors," it stressed while issuing the red alert for doctors.

When asked, Sharma said that the association is not blaming and criticising the government. "Our suggestions are directed to the doctors only. We don't intend to blame anyone," he said.

Meanwhile, the circular and advice mentioned in it have not gone down well with the government doctors. They said that they don't have many options and dependent on the government to ensure better safety measures.

"While this is on expected lines there is scope for lessening deaths across the age spectrum. Meticulous adherence to norms and discipline inside hospitals will have a salutary effect. Senior doctors who are decision-makers for the institutions have enhanced responsibility of taking care of their flock,' said Dr RV Asokan, Hony Secretary General, IMA. 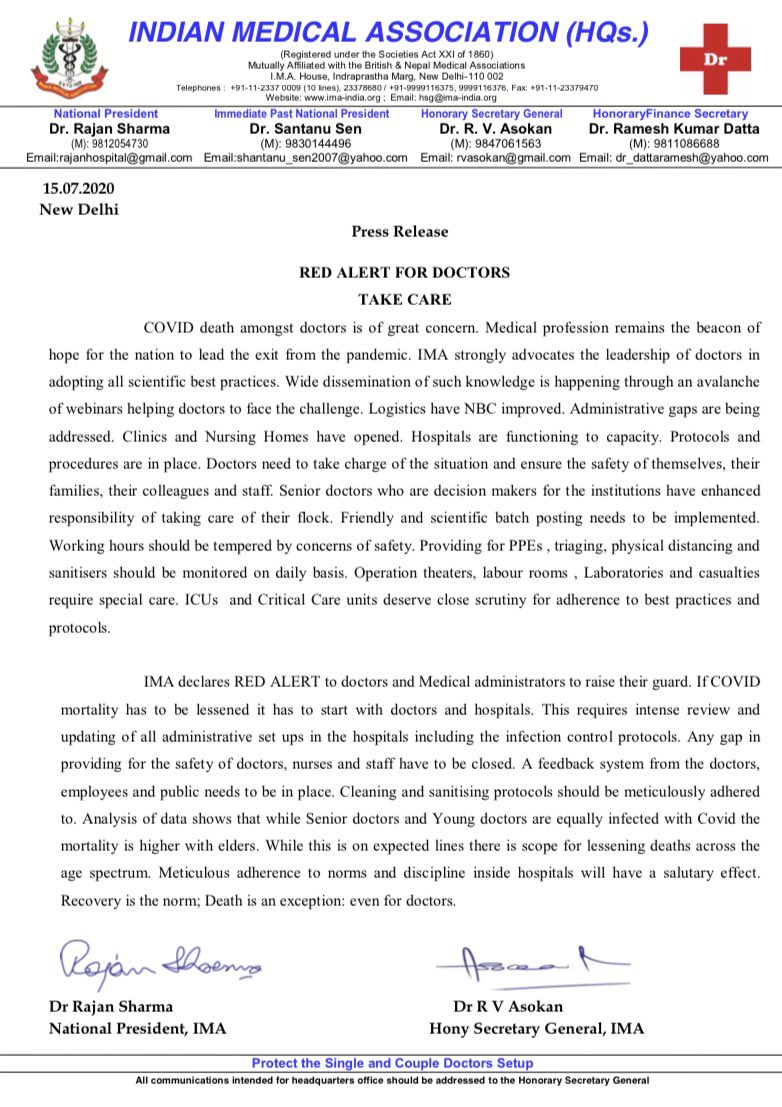 Meanwhile, Dr Adarsh Pratap Singh, president of the Resident Doctors' Association at AIIMS, said that rather than advising the doctors, the IMA should raise the problems doctors face during the pandemic. He also said that the suggestions by the IMA would be seen as vague unless they are directed towards the government.

"We are already doing our best. Rather than issuing advises, what the IMA should be doing is to raise the problems we face. It should ask about the vacant posts in the medical colleges and the hospitals. It should question the months of delay in salary dispersion. It should demand a proper safety net provided by the government. If these issues are addressed, our security and working condition will improve automatically," Dr Singh said.