Bengaluru: Coming down heavily on an Ayurvedic practitioner, the ethics committee of the Bangalore Medical College and Research Institute (BMCRI) has issued a notice to the practitioner clarifying on the efficacy of his Covid-19 drug or the ongoing clinical trial of the drug might be suspended.The Ayurvedic doctor is identified as Dr Giridhara Kaje, who was the...

Bengaluru: Coming down heavily on an Ayurvedic practitioner, the ethics committee of the Bangalore Medical College and Research Institute (BMCRI) has issued a notice to the practitioner clarifying on the efficacy of his Covid-19 drug or the ongoing clinical trial of the drug might be suspended.

The Ayurvedic doctor is identified as Dr Giridhara Kaje, who was the principal investigator at Prashanthi ayurvedic centre in Rajajinagar. He introduced two tablets called Bhoumya and Sathmya which are going through clinical trials at Victoria Hospital to see if the tablets are effective in curing COVID positive patients.

Meanwhile, the BMCRI ethics committee received information that the doctor is allegedly claiming that the tablets have already passed the clinical trials. Following the same, that committee warned the Ayurveda practitioner that they might suspend the trial process of the tablets.

In the backdrop, the BMCRI was approached by the Ayurveda practitioner for the clinical trial "to evaluate the efficiency and safety of tablet Bhoumya and Sathmya in an add-on therapy to standard of care in COVID-19 positive patients."

In its letter, the BMCRI clarified that the doctor was already aware of the fact that the trials are not over and he knew that the success of the trials has not been confirmed by the ethics committee of BMCRI, yet the doctor has made public claims regarding the beneficial outcomes of the tablets.

Taking serious note of the act during such serious circumstances, the BMCRI reprimanded the doctor as the notice read;

"This is unacceptable and amounts to overstepping of one's responsibility. You are aware that any disclosure of such sensitive information will have to be with all clearances from various appropriate authorities. The above act is viewed seriously since the information is very sensitive in the present circumstance,"

The notice further called upon the doctor stating that if the doctor doesn't present a clarification before the committee, they will be compelled to suspend the trials due to the doctor's "unauthorized act of misleading the public." 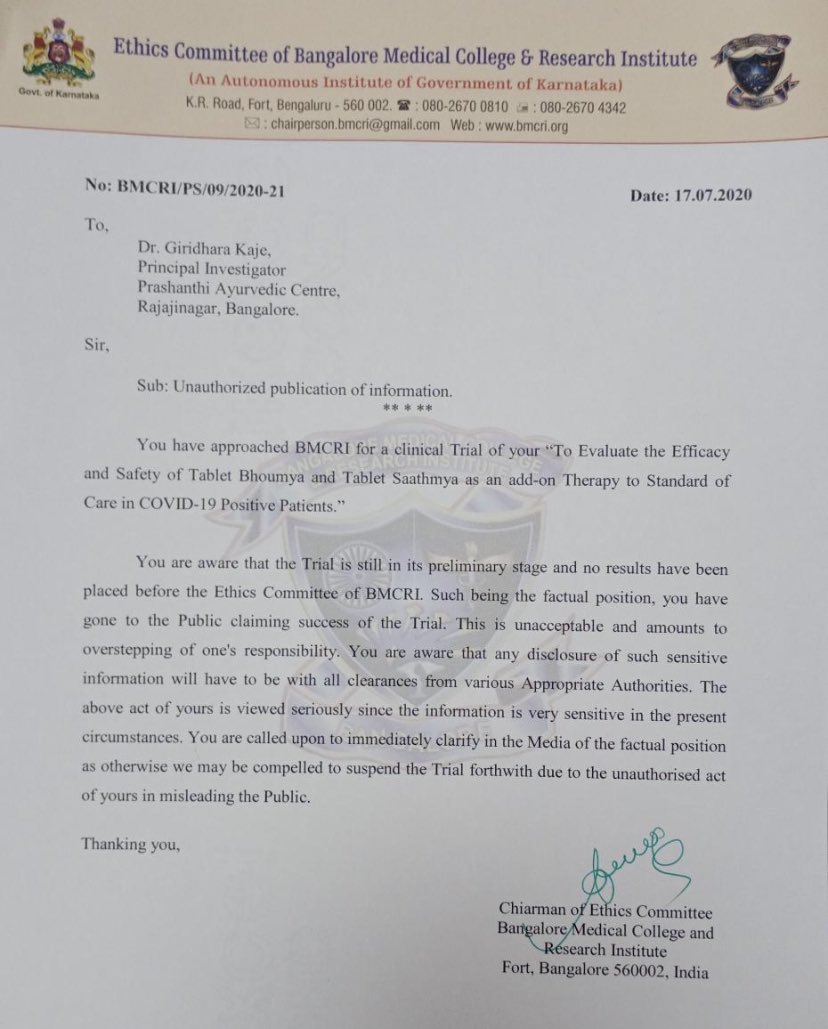 The Times Of India reports that the committee also found that the doctor allegedly made a public claim stating that the Tourism minister CT Ravi who was tested COVID positive recovered after consuming medicines prescribed by him.
Commenting on the allegations against him, the Ayurvedic practitioner told the daily, "I have not received any notice from the committee. I saw it on social media and it is dated July 17. I have never made such statements and until the medicine is authorized, I would not prescribe it to the patients. I came across social media posts where many claimed the medicine cost rupees 150 and can cure COVID 19. I have already said on my Facebook page that people should not get misguided by such fake news."
Finding the response of the Ayurvedic practitioner, one of the officials stated that the report "he submitted is just a claim. It must go through the scientific process and testing. He has shared data of the study in the public domain which is incorrect on his part. We cannot make claims without the clinical trials been completed."
Bangalore Medical College and Research Institute BMCRI Bhoumya and Sathmya #clinical trial #ayurveda AYUSH COVID
Source : with inputs