You all are doing a good job: LAMA Patient Letter to LHMC Doctors

By Meghna A SinghaniaPublished On 2017-12-20T10:23:46+05:30  |  Updated On 20 Dec 2017 4:53 AM GMT
New Delhi:  1 Bed- 3 patients.- the fact has become a routine for the overcrowded government hospitals in the country. The plight of a patient in such a scenario could not be more visible than a recent letter that was written by a patient, who left a government hospital in Delhi, after being unable to bear the sharing of her bed with two other patients. The patient who went LAMA, did indeed thank the doctors at the hospital for the caring provided to her, but confessed that she will be going to a private hospital for treatment in the future

The letter which has gone viral on social media since then, narrates the story of one patient Nisha who was admitted to the gynecology ward in Lady Harding Medical College. With the severe overcrowding at the hospital, the patient was forced to share a bed with two other patients, something- that she could not tolerate after a while. She mentioned her plight while thanking the doctors for their care

Thank you for your great caring but I am leaving the bed of Hospital. It was really stressful and painful to get rest with other two patients on single bed. It has continuously been happening with me since 10 days. Every night & day, I was getting restlessness.In my situation, I was helpless.

The patient while happy with the treatment given by the doctors, expressed her helplessness and conveyed her decision of leaving LAMA.

The treatments and the Drs are much caring in this hospital. Rest Rooms (Toilets) are also very restless. I know this is not the way of leaving the hospital without getting any advice but I could not have stayed in rest of days.

As a parting shot, she mentioned that she would prefer going to private hospital in the future, still thanking the doctor for their efforts-"you all are doing great job"

I don’t know the situation of future what is going to happen with me but I would like prefer Pvt Hospital first. Again I say sorry to Drs. And I would like say- you all are doing great job.

Attached is the letter below 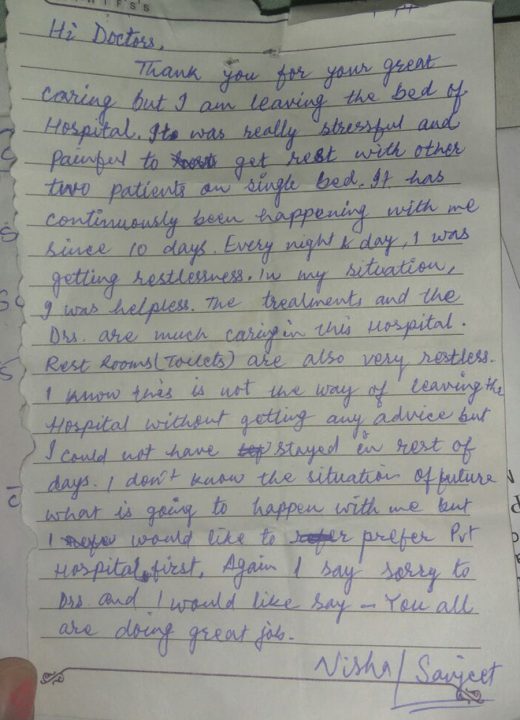